When most people think of making a trip to visit Cappadocia the main item on their bucket list, is to take a breathtaking balloon ride across the skies of Cappadocia. Without a shadow of a doubt the hot air balloon ride gets a massive thumbs up from me. It’s definitely in my top ten list of memorable experiences. But the fun doesn’t stop there. If you are thinking of heading out to Cappadocia, there are two more activities that I would really recommend trying out. In this post I will fill you in on the crazy fun that myself and my travel buddy Tara got up to after we got the customary balloon ride out of the way.

At the beginning of our stay in Cappadocia, an extremely smiley and friendly café owner explained to us that the name Cappadocia actually means: ‘the land of the beautiful/fine horses’. This got us thinking, and we figured that if we were in the land of the beautiful horses, what better way to honor that, than to partake in some horse riding on said beautiful horses. We then excitedly booked ourselves onto a two-hour sunset trekking tour.

Truth be told both myself and Tara are total novices when it comes to horses. Our parents were too busy adjusting to a new life in the UK as Pakistani immigrants to organise horse ridding lessons with Harriet and Tabitha around the paddock for us. Secretly I did feel slightly superior, as I had had one horse-ridding lesson a few years back on the outskirts of Istanbul. I had also ridden a horse at our local school fete as a child so unofficially that kind of made me an expert!!  No problem I thought and somehow managed to convince myself that I had this under control.

We chose to go with Goreme horse riding ranch and it was a great decision. We seemed to have got lucky because instead of being stuck with a big tour, which seemed the norm from what we noticed. We randomly ended up with some sort of private tour with just myself, Tara and our young guide. 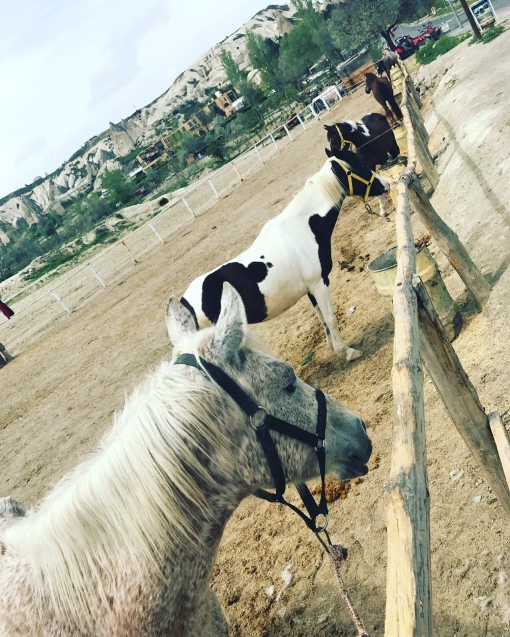 Goreme Ranch is based on the main street leading to Goreme open air museum. We booked a two hour sunset tour that cost 150 tl approx. 30 euros.

One of the guys from the ranch, Mustapha kindly picked us up from our hotel and on the way to the site explained to us that we should take some time to get to know our horses and feel confident.   This was an excellent idea seeing as I couldn’t decide if that feeling in my stomach was fear or excitement or both.

Once we arrived I was paired up with my horse Yildiz, which means Star in Turkish. To be really open with you sometimes I have a bit of an over active imagination and a childlike way of looking at new experiences. So it’s no surprise that I convinced myself I was some kind of horse whisperer. I did the exact same thing when I went Camel riding in Egypt and Morocco, only then I was the Camel whisperer. I then went on to spend the next 15 mins hanging out and chilling with Yildiz. We even managed to squeeze in some pouty selfies. Convincing myself that some how myself and my Yildiz had developed some kind of mystical connection and that now we were ready to literally ride off into the sunset together.

Me and Yildiz – the best of friends.

Horse introductions finished it was now time to set off on our little adventure. As I went to put on my helmet my guide handed me a plastic hair cap, I looked down at this cap horrified, when I put it on it literally poked out. No matter how much I tried to readjust it, it just kept poking out as if it sensed my abject horror at looking like a complete idiot and wanted to revel in the glory of my misery. So much for instabeautiful. More like Instanerd. Oh well it’s all about the experience not the glossy imagery.

I wasn’t exaggerating about the dodgy plastic shower cap!!

Maybe it was my imagination or maybe my crazy idea about horse whispering actually worked but my horse Yildiz was perfect. She guided me down the paths with ease and experience. At one point I found myself confidently riding my steed at a steady pace, blissfully taking in the breathtaking views and dreaming of what life must have been like here years ago.

Unfortunately for me, my peaceful meanderings were shattered by the fact that the terrain had suddenly changed and what was once a leveled path had turned into a steep path downwards towards the valley. I stopped my horse and peered down at what appeared to me a very sharp incline. Not quite sure what to do next. I saw our guide peering back from the bottom of the incline, looking at us as if wondering why an earth we weren’t moving. It’s easy to think like this when you learnt to ride before you could walk. For the apprehensive city girl it wasn’t such a walk in the park. With no other choice I leant back and hoped that I didn’t go tumbling over Yildiz’s head. It worked and it was worth every skipped heart beat on the way down.

The tour was beautiful. We got to trek through some of the terrain that we had seen from our Balloon ride and watch the sun set over the mountains. Unfortunately I didn’t get many good shots of the stunning landscapes, I was too busy holding on and getting caught up in the moment. The horse riding treks are a must. Its relaxing and fun and at times exhilarating and scary but you will wish it wouldn’t end.

We told Mustapha that there was one more item that was on our to do list. That was an ATV bike ride. You soon learn in Goreme everyone knows each other and it’s a great way to get a good recommendation.

Mustapha then introduced us to his friend Mustapha who we renamed Mustapha number two to clear up any confusion. Mustapha number two ended up being an extremely funny and entertaining guy that ran adrenaline quad bikes. Again we got lucky and instead of being stuck on a tour with 20 other tourists we got a tour guide to ourselves. 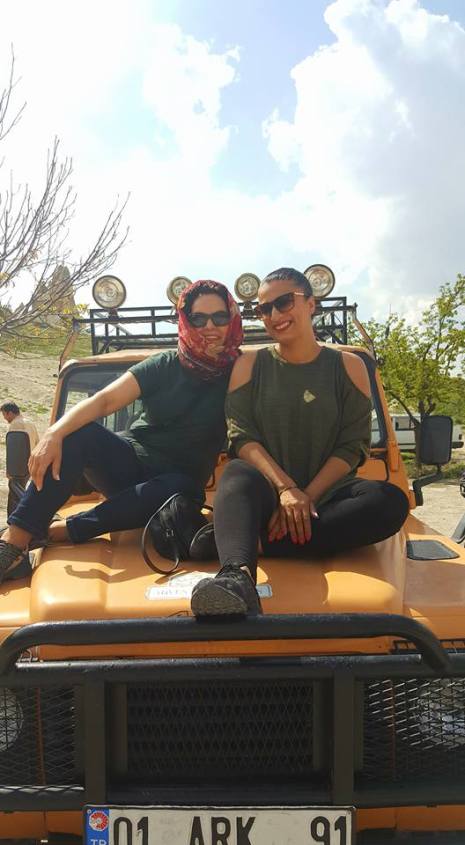 We paid 110 per bike for a two hour tour with adrenaline quad bike. We chose to go at 3pm instead of at sunset as it gets crowded on the paths after 5 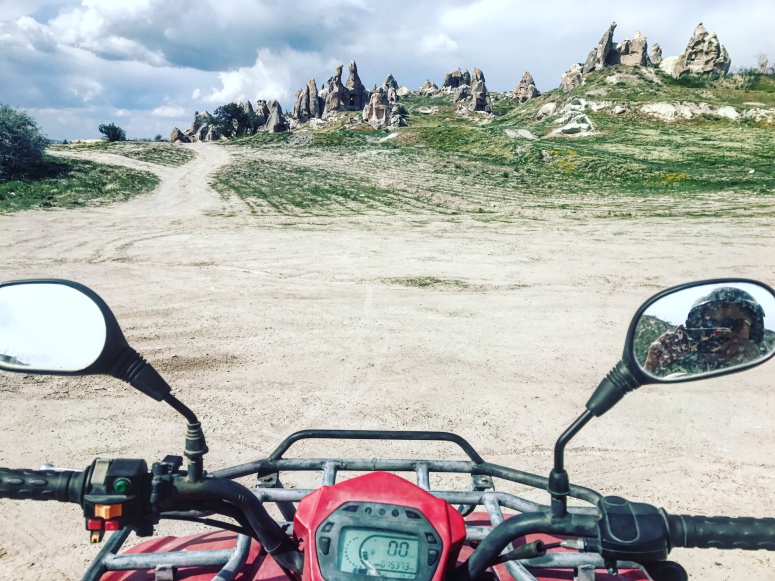 There were a few hiccups in the beginning so we set off with Tara on the back of the tour guides bike followed by an over-confident me. I don’t know if you know about DMX and the ruff ryders crew….but for those in the know, yes that track was buzzing in my ears. As I zoomed along at a speed totally unsuited to my inexperienced skills. I realized with horror that I was headed toward a gigantic pile of rocks. Not even a pile but what seemed a literal mountain of rocks. Before I could even react or attempt to steer away, I found myself halfway up the pile of rocks trying to figure out if it would be better to accelerate and attempt to go over or to break and roll back. I think at one point I attempted to do both out of sheer panic. Somehow I found myself rolling back down. I just remember the look of utter horror and fear on the face of our tour guide as he ran frantically towards me. I responded in a typically British manner by announcing that I was ok and that there was no problem as I rolled dangerously down the hill. I think I was still mumbling it when he managed to regain control of my bike and guided me back down.

We had been pre warned that Ali was the best guide we could have asked for and that he was errrrrr well, a little crazy. What should have been a leisurely ride though the valleys turned into me driving behind Ali while he preformed exhilarating stunt after stunt with Tara screaming with laughter sitting behind him. Truth be told its lucky I didn’t crash again from laughing so hard as I watched Tara whizz pass holding on for dear life.

Fun and craziness is so infectious that I soon forgot about my earlier accident. Before I knew it I found myself speeding along. It felt exhilarating. I felt like a teenager on the first day of the summer holidays. Ready to cause mayhem and trouble.

disclaimer this was just camera trickery engineered by Ali our guide.

The scenery was so beautiful and other worldly. It felt so strange to drive through something that looks so prehistoric on a piece of roaring modern machinery. It was such an oxymoron of a situation. But one that you wont for get in a hurry.

Everything about this holiday to Cappadocia was pretty amazing but if you take away one thing from this article is that Cappadocia has a lot of cool sporting activities for the energetic travel. I can’t wait for the next adventure.

3 thoughts on “Adventures in Goreme.”

The cats be balling in my hood #cats #catsofinstagram #rangerover
Put the sound on this video and hear the beauty of the Azan- the Muslim call to prayer. It’s one of my favourite things about living in Istanbul #istanbul #turkey #sunset #azan #myexpatlife #muslimtravellers
Back to work and back to reality but I can’t stop thinking of the feeling when the tide laps over my feet. Oh at least I have something to dream about at work. #takemeback #summerholidays #alacati #turkey #girlstrip #liveyourlife #expatlife #browngirlmagic #travelgram
Boat tripping in cesme. I love boat trips, there’s something calming about the sea and not forgetting how great a tan you get on a boat #boatrip #cesme #turkey #holiday #girlstrip #familyholiday #blueseas #browngirlmagic #muslimtravelers
The beautiful old village of Pocitelj is actually a centre for art.Since 1964 the village of Pocitelj has hosted the Počitelj International Art Colony. A place where artists congregate over the summer to seek good company and inspiration. #art #pocitelj #bosniaandherzegovina #ottomanvillage #browngirlmagic #bucketlist #expatlife #femalesolotraveler #girlswhotravel #halalfun #halalholiday #instaphoto #muslimtravelers #passportheavy #photooftheday #travelgram #woctravels